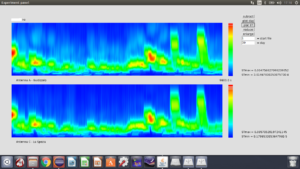 In the picture of this post you can see a comparison between two spectrograms of a signal detected at the same time at two different spots at about 150 km distance from each other: the antennae were placed in Guidizzolo (upper diagram) and La Spezia (lower diagram).

A spectrogram is a diagram where colors describe the amplitude  (blue minimum red maximum) of the signal at a certain instant (running horizontally from  0:00 to 8:00 January 30 2017)  and the frequency runs on the vertical axis.

The two spectrograms are almost perfectly equal and the same result was revealed by two antannae placed at a distance up to 1450 km as you can see in the following picture. In this figure (lower diagram) the antenna placed in Athens started  at 2:19 Italian time later than the one placed in Guidizzolo (upper diagram). Both the PC-antennae were sinchronized at the same time. 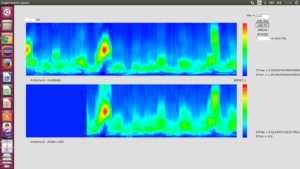 What does it mean? As a matter of fact such  detectors capture a signal coming on the Earth with the same pattern independently of the (geographical) position of the antennae and even in different environmental conditions (temperature, pressure, light,..) 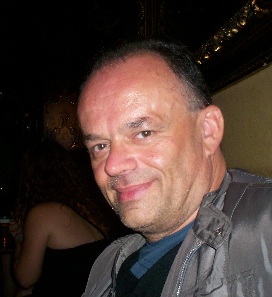